I have been the caretaker of the bell and the clock in the 1875 Waitsfield United Church of Christ/Village Meeting House steeple since 1987.  This build is the third Congregational Church, and was from 1923 to 1994 a Federated UCC / United Methodist Church.

Here are photos of the  1894 36 inch diameter Meneely (West Troy, NY)  bell in the steeple of the Village Meeting House / Waitsfield United Church of Christ (WUCC).  The bell was originally installed in the Methodist Church across the street in 1895, after that building was rebuilt following a fire.  The Methodists and Congregationalists federated in 1923, and alternated the use of their buildings; the Methodist Church was warmer in winter, the Congregational (now WUCC) was cooler in summer.  In 1941, the Federated Church sold the Methodist Church building to the Town of Waitsfield for use as a municipal building.  The bell was removed from the steeple, and installed in the vacant Congregational Church steeple a few years later.
Here are also photos of the Verdin Clock mechanism located in the same steeple and its appearance on two of the four sides of the steeple.  The clock is owned by the Town of Waitsfield, a gift of Harry Belden installed in 1957. 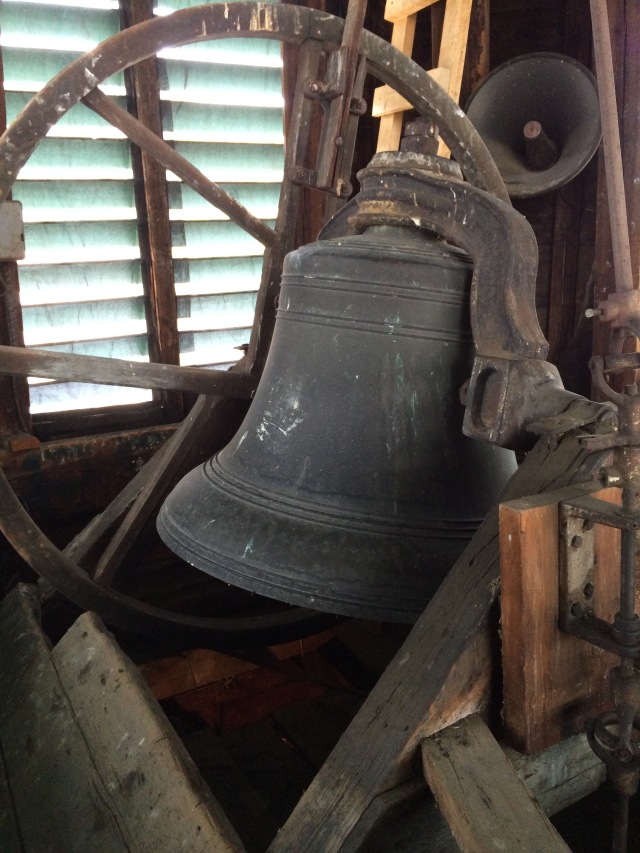 Meneely bell, 1894, about 900 lbs,  in yoke on A frame with wheel for rope downstairs to turn bell. On right the vertical steel rod a universal joint heading up from the clock mechanism below to turn the hands on the clock faces above. 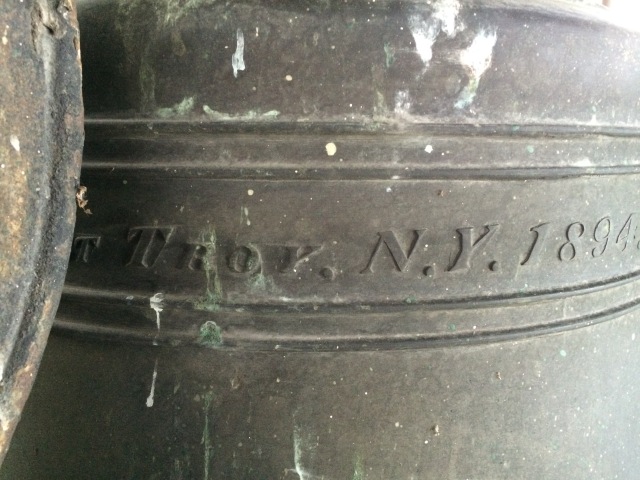 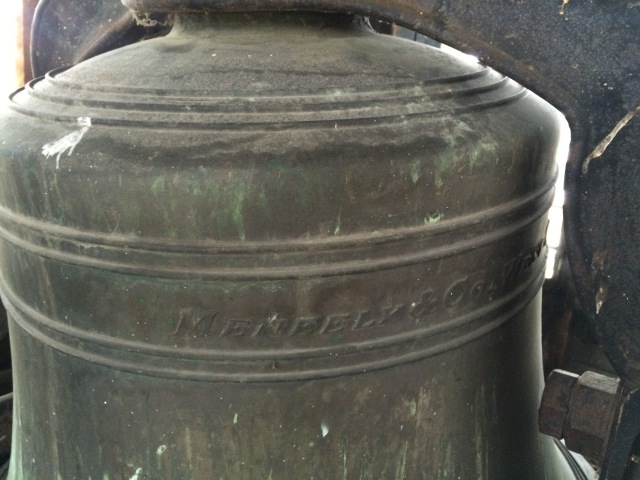 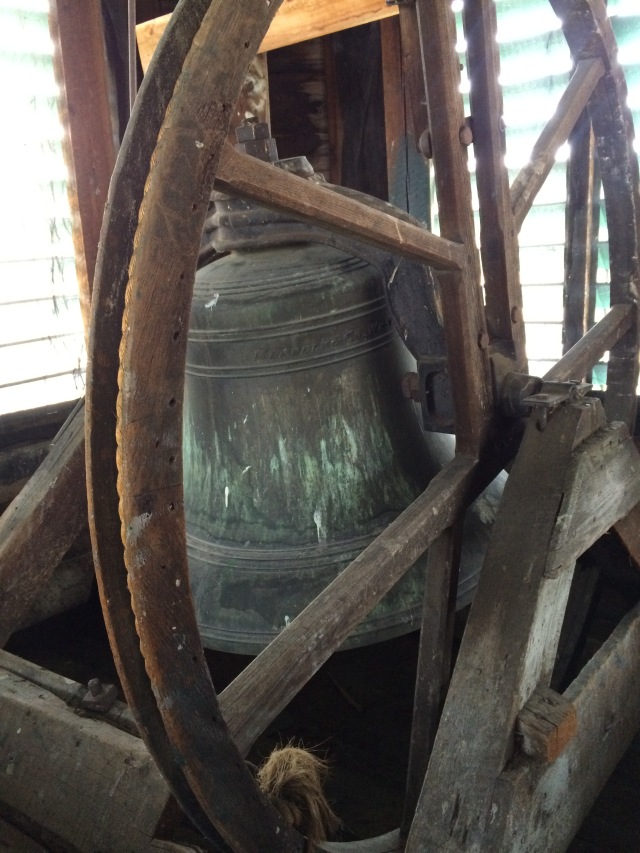 Rope runs through grove in wheel. Clapper inside bell strikes when bell swings on pivot 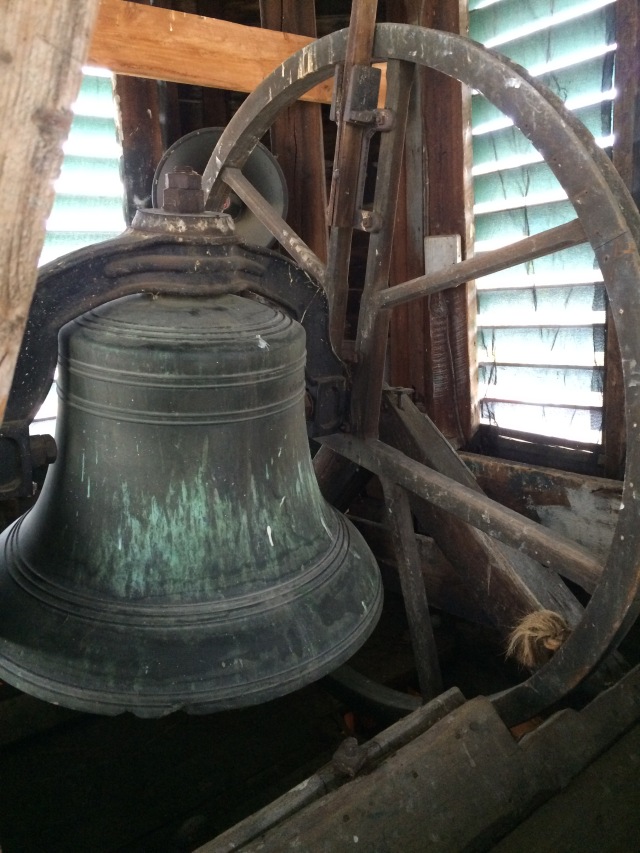 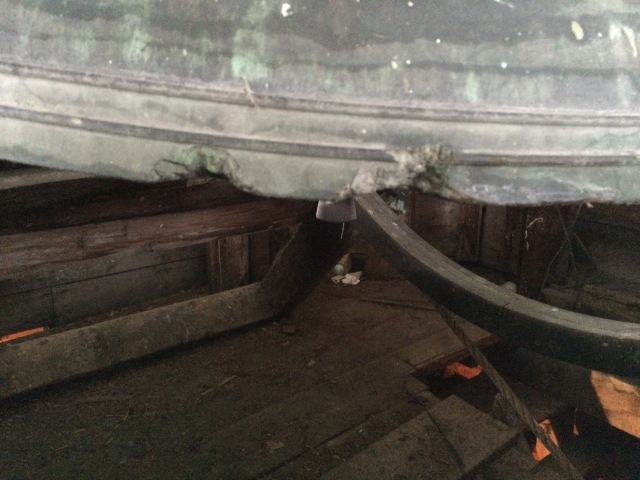 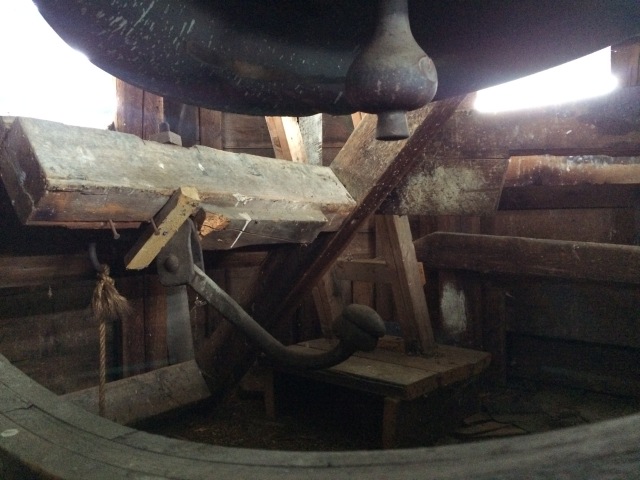 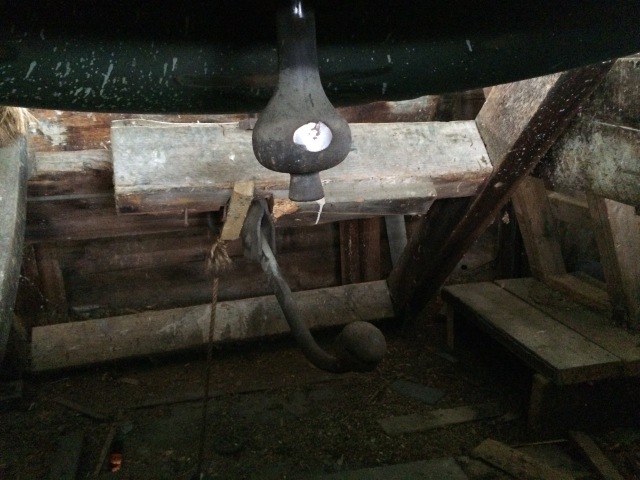 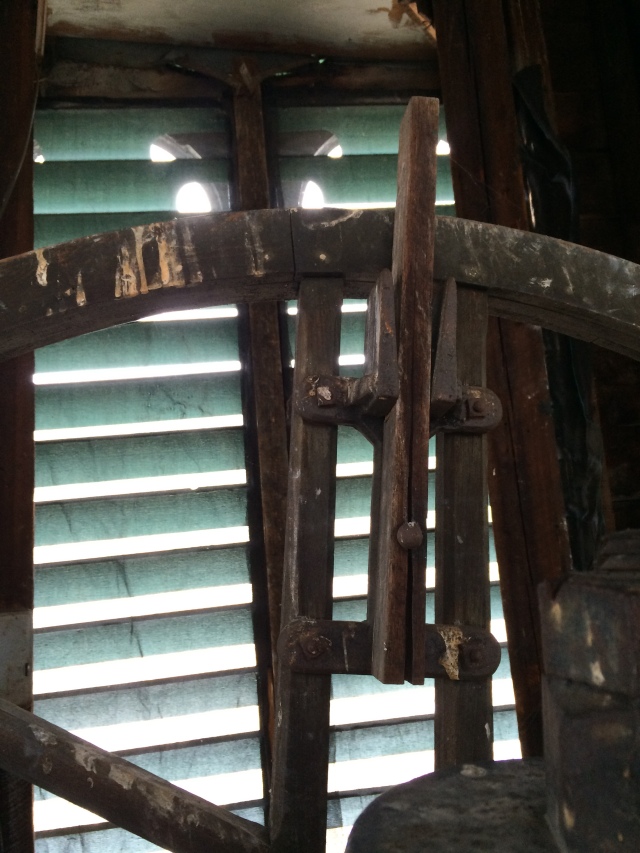 A top of wheel, a split piece of oak with some flex is meant to stop the bell so it does not flip over. 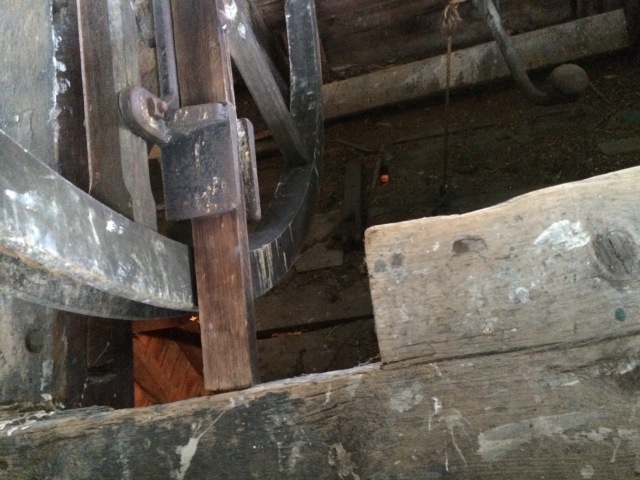 Some one cut out the board, or trimmed the oak spring so it does not stop the bell flipping over, which it does now and then, usually with a smaller person getting a good rhythm going on the big rope. Hard to hear bell inside the church- so they just pull harder and harder. 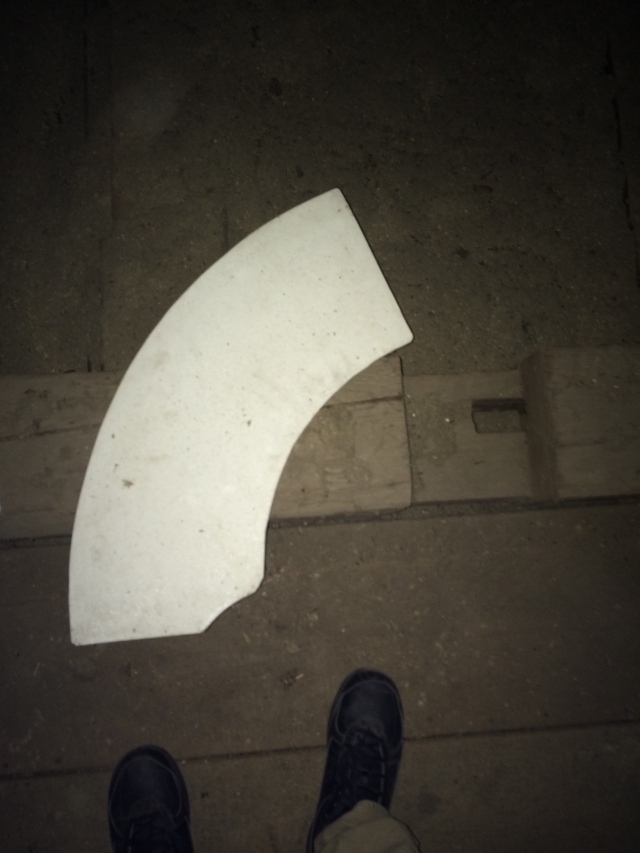 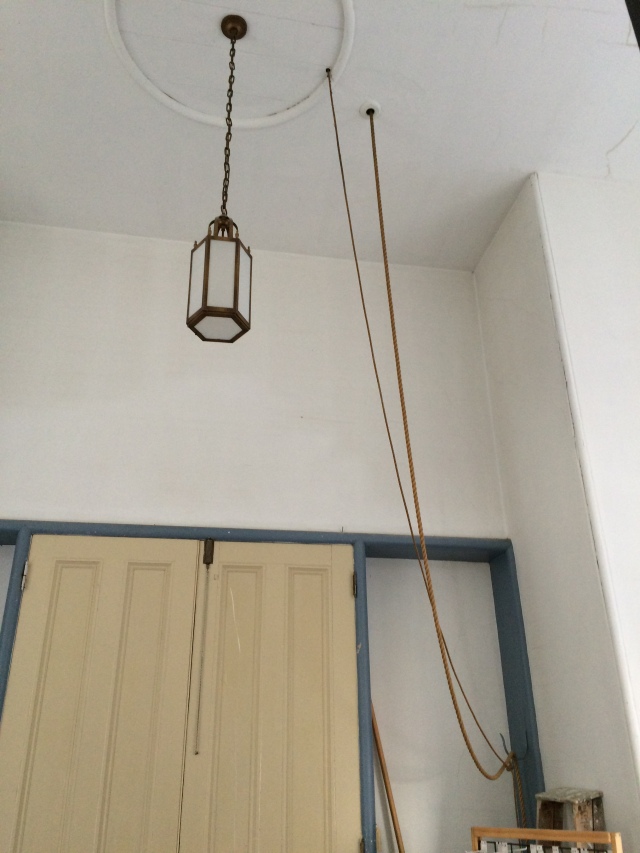 Inside front door, the two ropes hang in the vestibule to operate the bell wheel and the tolling hammer. 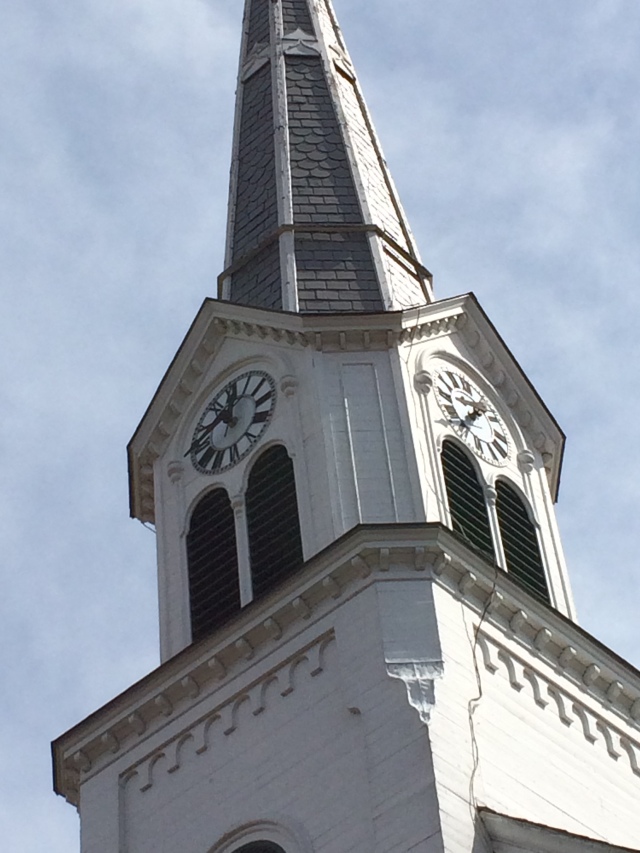 The two clock faces are on the South and West sides of the steeple. A gear box takes the movement of the steel rods coming up from the Verdin mechanism, operates the two horizontal steel rods that run out ot the clock faces. A box behind each clock face holds electric lights for back illumination. 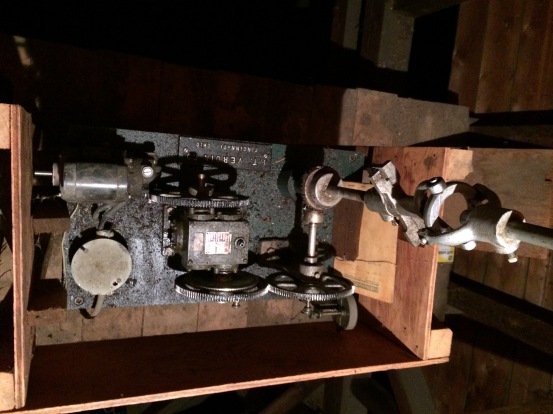 Looking down on clock mechanism- from left, the motor, gearbox and clutch, small clockface to monitor (top visible, gray, lower right), and steel rods and universal joints from mechanism to clock faces. 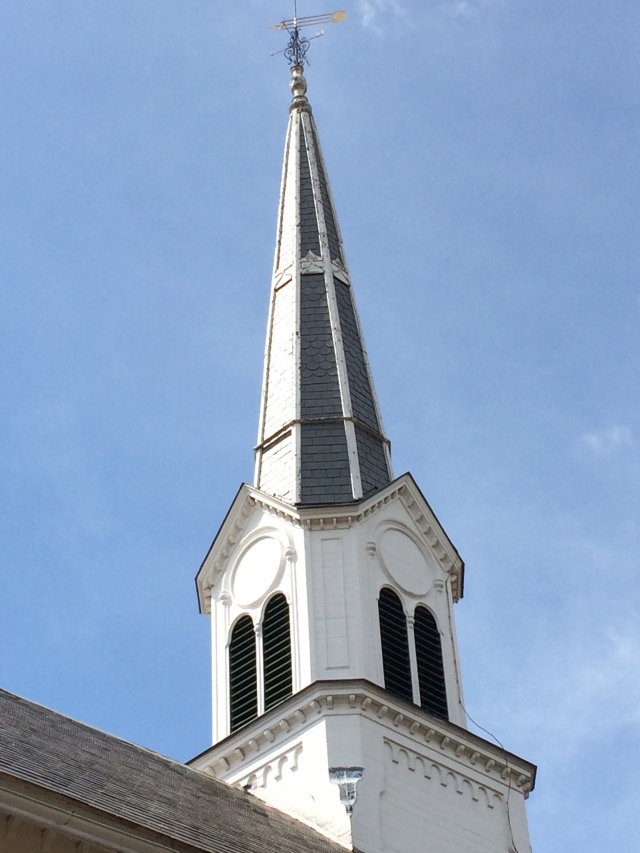 The East and North sides of the steeple do not have clock faces.  All four sides were empty from 1875 to 1957. 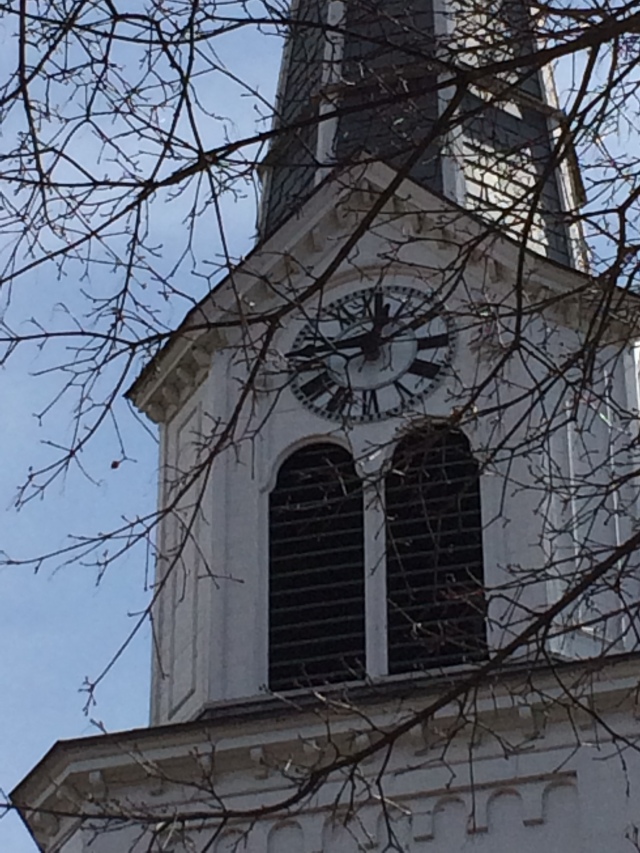 The rod extending on the short side of each clock hand are heavy counterweights for the relatively light hands.