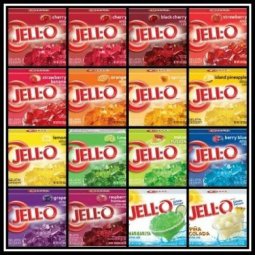 AND OK, Where we speak of flame we mean FIRE which mens you must
take DUE CAUTION, especially with children.  Even birthday candles and
matches deserve CAREFUL ATTENTION and PREPARATION
and SOBER JUDGMENT.  I suggest a bowl of cold water handy at all times to immediately cool fingers that get hot from water or anything else.  A fire extinguisher is a good idea, but a wet towel may be more effective.  That said,  have fun!

1. Make lots of Jello in different colors.  Cut it into cubes.
My grandmother called this “broken glass” Jello.

2. Mix them up or layer the colors into a rainbow in a clear serving container-
Blue, Purple, Green Yellow, Orange, Red-  lots of flavor and color choices.
Maybe a cut crystal bowl, or a clear vase- something to enjoy the visual rainbow of Jello.

3. Garnish You can top it with whipped cream and serve it. Make it pretty, like cake decoration. Use your creativity.  A volcano! A dry forest. Origami dinosaurs. Monopoly house and hotel town. Marshmallows- tiny toasted ones- with faces.

4. Flame it!  For a party, I suggest putting a tiny plate with a candle on top.
Then spray a mist of 151 proof rum from a clean spray bottle past the candle.
You will get a brief cloud of flame, and the smell of rum- actually better rum than the thin stuff in 151 rum. 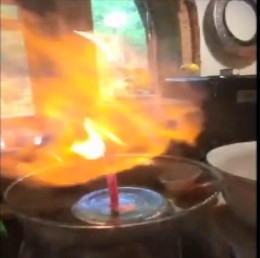 For adults, I put a small amount of dark rum (Myers or Goslings for example) on the Jello itself.  Think of it as a rum fruit drink).
Because the Jello is cold and wet, you can pour 151 rum on the Jello and try to light it.  If so, be sure the heat will not crack your serving dish.  Gotta say, the cloud of flame in the air over the dessert is SAFER and FASTER and MORE RELIABLE and UNDER CONTROL, compared to a flambe in the dish.

Photo here of multi-colored Jello in glass urn with whipped cream and candle on top and big ball of flame over it from atomized rum spray.

Jello still is served in over a billion dishes a year globally.  Everything from fancy gourmet aspics to mom trying to hide vegetables in the children’s diet, to kids learning to cook, to alcoholic Jello shots.  Yes- the flavors are a blend of natural and artificial. Yes, there is almost ten times more sugar than protein in Jello.  About the same ratio of carbs to protein as in whole wheat flour.  Condemn what you want.  I prefer to enjoy the riotous colors, the unique texture, years of silly advertising  (“Chinese baby love Jello!”  and “There’s always room for Jello!”, the simplicity but demand for following directions, and my Grandmother’s lemon Jello with julienned carrots on a bed of Boston lettuce, topped with a miraculous dab of Miracle Whip.

Video (or link to YouTube) here of multi-colored Jello in glass urn with whipped cream and candle on top and big ball of flame over it from atomized rum spray, showing how it is done safely.

Polypeptide chains  (bits of protein) are unlinked in liquid form-
Warmth jiggles the weak links apart.
When chilled, the chains link up and “gel”.

THE SCIENCE OF JELLO AND JAM
Finally, let me say that I love Nature’s surprises to my scientific brain.  Thirty years after earning my PhD I learned that humid air is lighter than dry air, and adds about 20% of the lift to moist air rising from a sun-drenched forest or field, the source of many summer afternoon thunderstorms.  And a little rum in my homemade ice cream depressed the freezing temperature so I can barely get it to thicken at all.  But a mess of alcohol substituted from water in Jello- so-called Jello shots- does not stop the gelatin in Jello from gelling.  Maybe I should try some Jello in my rum-raisin ice cream!
My favorite local jam maker, Ruth Pestle, makes excellent strawberry rhubarb jam.  I buy all I can get at the Church bake sale.  How DOES she keep it so red, when rhubarb and strawberries like turn brown when heated?  I served some to my friend Fred as we worked on a renovation project one morning.  He loved the jam, and said it was just like what his mother used to make.  Well, chatting about it, we discovered Fred’s mom and Ruth were best friends.  Fred dug through is mom’s recipes and found what is clearly also Ruth’s recipe.
The secret to just the right amount of gel in the jam, and the bright red color, and lovely strawberry flavor over the sour rhubarb?  You know you know. Yep.  Strawberry Jello.  1950’s farmhouse wife’s ingredient for homemade jam.  Call it commercialism.  Call it clever.  Don’t call it anything, except exceptional jam!  By the way, Ruth’s PhD is from Cornell and she is a Florida State University professor emeritus,  has a scholarship named in her honor, and was a General Foods Fellow.

Gelatin (the gel in Jello, and used as the famous Knox brand by home jelly and jam and pie makers) is usually made by rendering the collagen from meat packing houses- hide, bones, etc from cows and pigs mostly- roughly the quarter of our bodies that is not water.    The packing houses, like Eskimos, endeavor to use the whole beast from nose to tail,  and waste nothing.
Collagen is a triple strand protein familiar to many people as hair, but the structure also of skin, bones, cartilage, tendons, brain, and other organ tissue.  Gelatin is labeled Kosher and Parve because most rabbis and imams say the processing conversion completely changes the identity of the material.  Though derived from animals, the hydrolysed collagen we call gelatin is viewed by most religions and many vegans as acceptable as non-meat food (parve).  The collagen protein has been broken down into small peptides, extracted and purified,  so that it is a raw material of life, like water, or starch, or salt.   Do we avoid walking near a pig farm because we might inhale the moisture which the pigs exhaled?  Do we not drink water because it might have been part of a lobster, pig, or Nazi?  The cycle of chemicals in our world builds up and tears apart complex molecules.    I once calculated that every breath you take you exhale about 20 oxygen atoms breathed by Hitler.  Creepy.  But you inhale about 20 atoms of oxygen in each breath which were exhaled by Jesus of Nazareth.  Talk about a melting pot.  We live in an atmosphere and stew of recycled molecules.  After iron at the Earth’s core, the most abundant element is oxygen- largely combined with silicon to form the rock material we call the crust of the Earth.  A tiny amount of Earth’s oxygen is floating in the atmosphere we breathe.
However, some religious authorities and diet watchers disagree about what is Kosher and Parve.  Strident they are.  They look for gelatin extracted from plant material, where it is not common.   To each their own.

1  Use plastic for your mixing bowl and for your measuring cup(s). When you use metal or glass, the hot water from your stove is quickly cooled.  You want the Jello to dissolve fully in hot water.

2 YES- TWO MINUTES.  Stir Jello for two minutes in hot water.  Follow the directions.  Just because it LOOKS dissolved to you, when you stop stirring too soon and the gelatin sinks invisibly to the bottom then you get chewy Jello on the bottom and runny Jello on the top.  Whose fault is it you did not follow the directions.  TWO MINUTES!  AND STIR!

3  I use a three cup Tupperware with a lid to make a standard two cup batch of Jello.  (One cup hot water, then one cup cold.)  I have a small cut in the lid to let air escape when it heats up from the hot water.  I stir for 15 seconds with spoon.  Then put the lid on and stir by simply moving the whole thing in a circle, first one way then the other.  Swish swish, stirring not gentle. Wet counter helps.

4 I put four ice cubes in a one cup measuring cup.  Then fill it to the brim with cold water.  YES- TWO MINUTES stirring the cold water in the mix.  Swish swish, round and round. This melts the ice cubes, and get your gel already started gelling and ready sooner.  Less chance of heavy gel dropping to bottom.

5 I use a thermometer for my cooking.  A pointing infrared (IR) $20 pistol.  Baking, candy, oven, BBQ, warming soup, microwaving leftovers. I monitor my Jello, hot, and warm, and cold.  Cooking is science.  And science is cookin’. 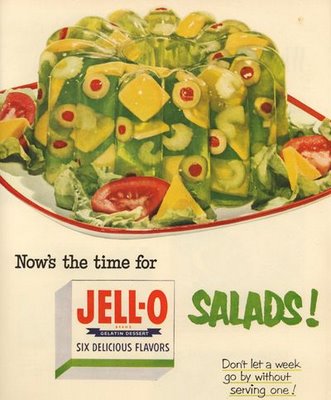 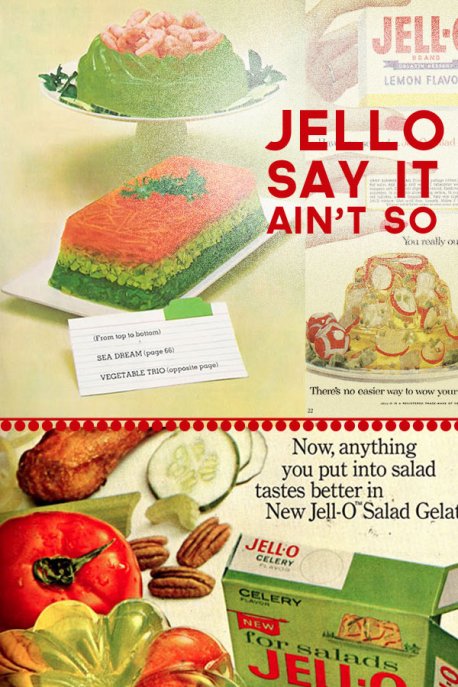 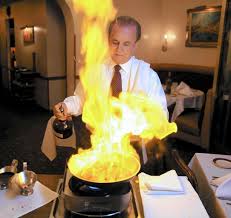 The Other End- Where the Jello Goes
Disposable diapers work just like Jello.   Sort of.  And sort of better.

An inexpensive dry hydrogel (usually sodium polyacrylate, AKA waterlock, and also used for water retention in some potting soil)  inside the disposable diaper does not just absorb water like a cloth diaper.  The liquid pee dissolves the hydrogel material and instantly forms a semisolid gel which does not leak and which absorbs far more water for its weight than a cotton or hemp cloth can.  (500-100 times its weight)

Jello Protein  Nutrition
A Jello package is 0.3 ozs of gelatin for 16 ounces of Jello made up, only 50 times its weight.   The hydrogel absorbs almost instantly, and at warm temperatures, which makes Jello seems real slow and cold.  But on the other hand, it’s yummy.  That 0.3 ounces of gelatin is a pretty complete protein, and about the same  ten to one carb/protein ratio as pasta and bread.  (All sugar and no starch though.)

Gelatin and Collagen amino acid portions.  Derived from animal tissue, so no surprise it is a “complete” protein in terms of body structure. It may be a bit low in essential amino acids, especially BCAAs, leucine, isoleucine and valine, for other body proteins and metabolisms.