Repair Septic tank with rusted out baffle, and replace septic field pipes- old clay pipes filled with roots and soil.  June 2016  Three days, solo project.
After 2015 toilet drainage problems and year-long consideration of options, and refusal of local contractors to bid the job, I devised a plan to repair septic tank and field.
I had to “replace” baffle in tank so that solid that float and solid that sink in tank would not enter field. Baffle sends septic water from middle of tank to field.
Field was clogged, so drain pipes had to be replaced.  No easy access to gravel whose space between rocks provides storage volume during heavy usage until water can perc down from field.  So I devised triple standard 4 inch dia drainage pipes, wrapped in drainage cloth to prevent soil and root infiltration which caused demise of old clay pipe field.  Same pipes- single- had been used decades ago to extend clay pipe field. I paid careful attention to pitch of pipes, as old field favored lower pipe, closest to lake.
June 2017- Drove through from Vermont to Wisconsin, stopping in Marquette (closest Home Depot) for materials- drain pipe for field in canoe and on roof rack.
Ferried pipe etc to island.
Attention to baffle, and several trips to Hayward, solved rusted out baffle with vertical pipe and rubber adaptor to clay pipe tank outlet.
Keeping new field fairly level required mounding over lower side of old field.  Dug trenches, pulling up little of old clay pipe as it was too low anyway.  Assembled triple drain pipes (with shortage of end caps-  Home Depot brain fart)  and brought down many wheelbarrow loads to cover from hill behind cabin. Many.    Then seeded with Scott’s blue-green seed and mulched with lawn grass trimmings.
1945 Septic field was too small and clogged with roots, and dirt from septic or between clay tiles.      On a tiny island in a remote lake.  Boat access only.  Contractors won’t bid on this job.
2016  This project
Tank is 4 ft deep by 4 feet diameter  50 cu ft or  375 gallons
Darn- no Earth satellite photos in last two years.  But I hear it’s good.  Looking forward to a picnic there this year.

Shopping for drainage pipe for septic field at Lowe’s in Marquette, UP, Michigan.  Shop local. Four hours away, closest big box on way- no time to drive into hayward first day. On a schedule.

Darn. 20 pieces do not fit up in canoe. Looks like Beverly Hillbillies in a hybrid. 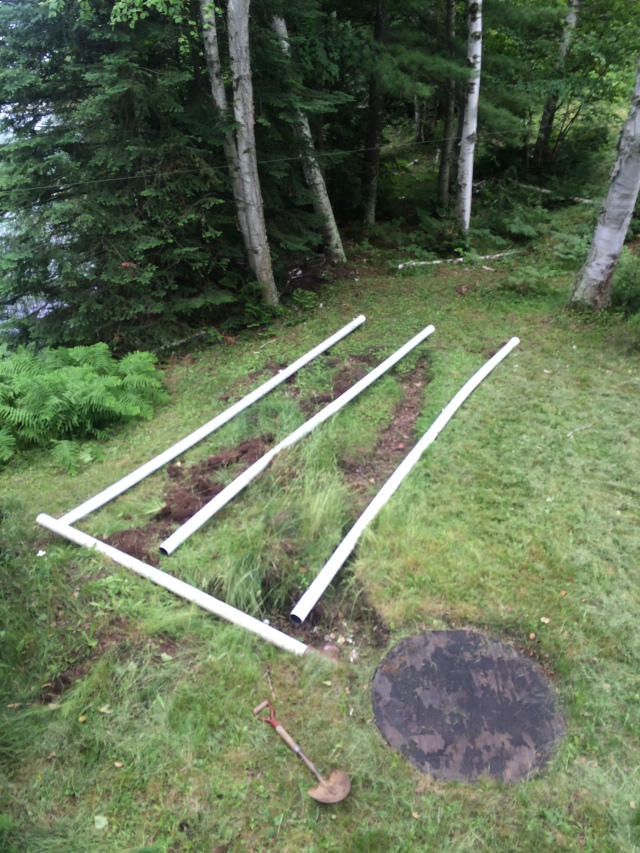 First canoe load of pipe, laid out to see if vision matches lawn. 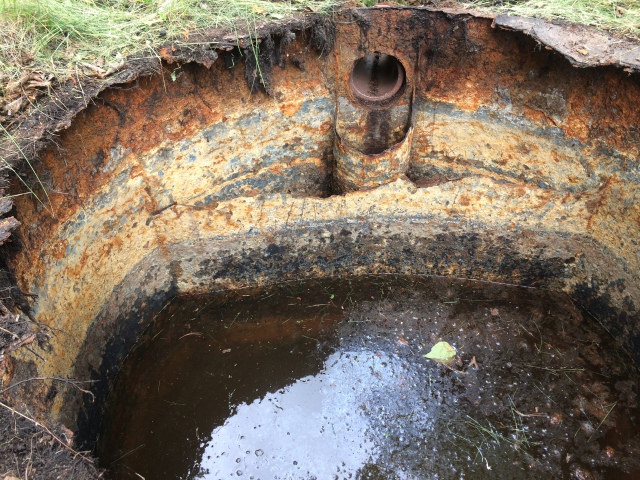 Tank (1945, 500 gallon) water, but baffle is rusted out.  Baffle keeps floating solids at top and heavy solid at bottom from entering field.  Just”clean” (i.e. liquid) water from middle of tank goes out to field to perc.   “Perc” (Percolate) means water goes down through soil, and up through roots to transpire through grass. Space between gravel in traditional septic field trenches holds water until it percs away. 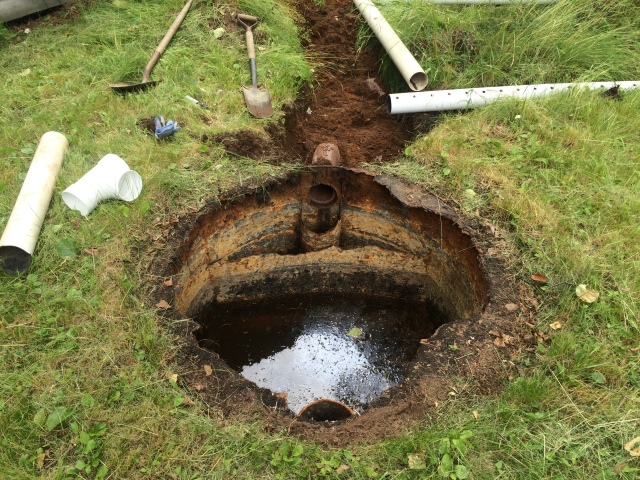 The great unknown.  How we gonna connect plastic drain pipe for new field to old mortared clay pipe joint at steel tank (circa 1945)? ?

New baffle draws water from middle of tank depth and black rubber gasket seals connection out to field.  Cap at top allows inspection. Milky Way for scale.  So you can see ruler is accurate. Hayward hardware store- gasket in stock.

Dig and think.  Dig and think.  And that baffle is beyond repair.  New modern hi-tech baffles with inspection from top and filters- unneeded and expensive.

Another load by canoe to island.

New Baffle installed.  Pounded pounded the rubber gasket into the side of tank.

The field side of the baffle and tank.  Yeah yeah, drain pipe holes will go down. Just checking layout as digging trench.

Just laying it out. Checking slopes. Single pipe in field will become a triple pipe.

Top tube sticks out of bundle to connect.

DNR shows up to inspect.

Who forgot caps for all the pipe ends.  Gaffers tape will do fine.

The whole field of clay tiles was filled with mud and roots.

Mud and roots from inside a clay tile.  The loose joint between the clay tiles let the water perc out.  But over decade let roots and dirt in. 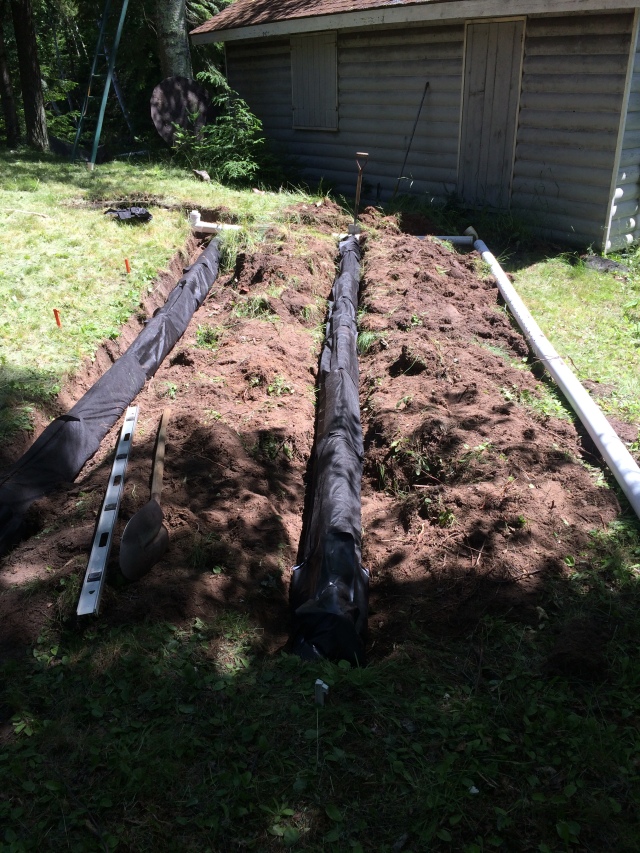 Second channel in progress. Note level to check slope of pipes. (Gift from Fred years ago.) 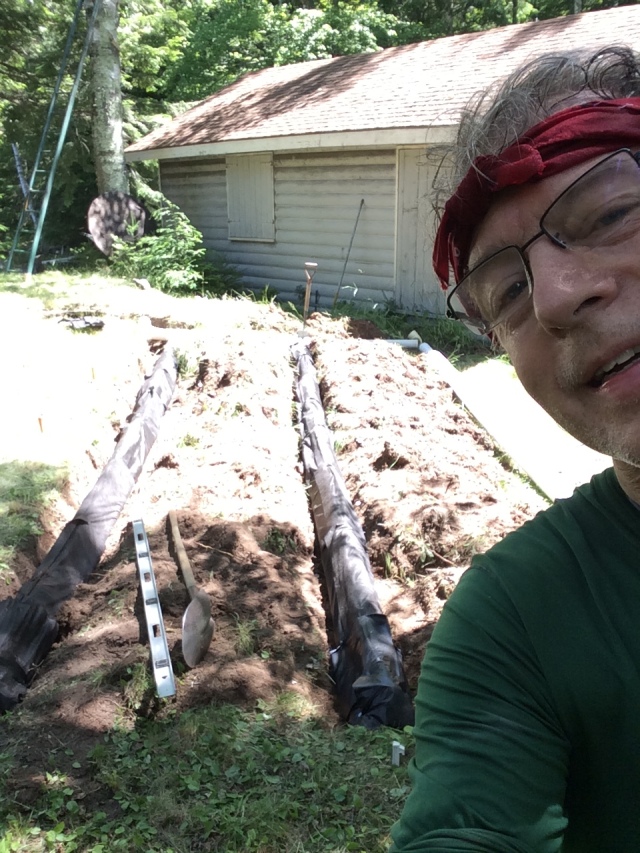 Selfie with progress.  And sweat. See ladder on tree? 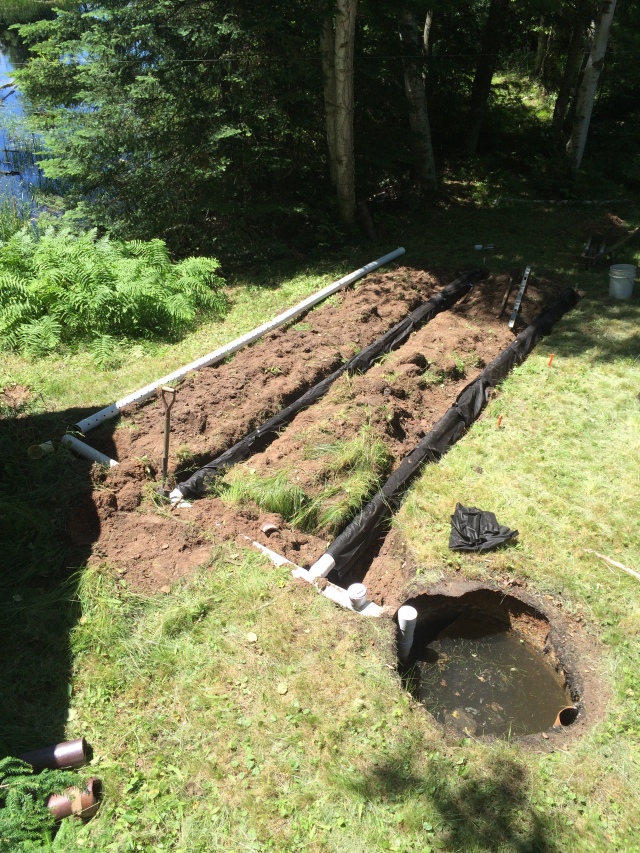 Looking down on progress from ladder. Two tubes wrapped. Third tube needs “mound” not trench so all three tubes share the effluent from baffle in tank. 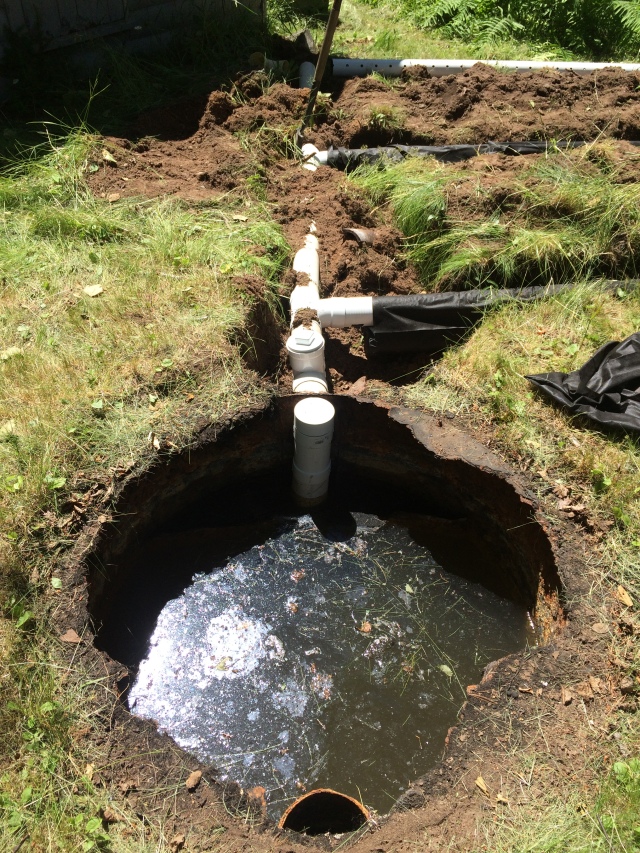 Uh Oh.  Who has been flushing toilet? Will effluent pour out of tank before field is ready? 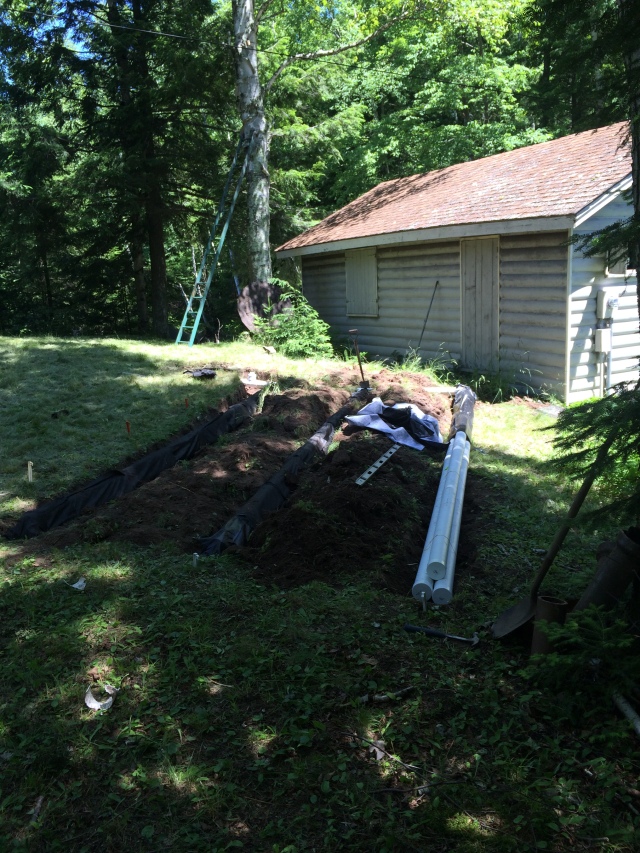 Saved the plastic end caps for the last triple tube, since it is the lowest and might have more water pressure, and being closest to lake we want it to perc, not leak out end. 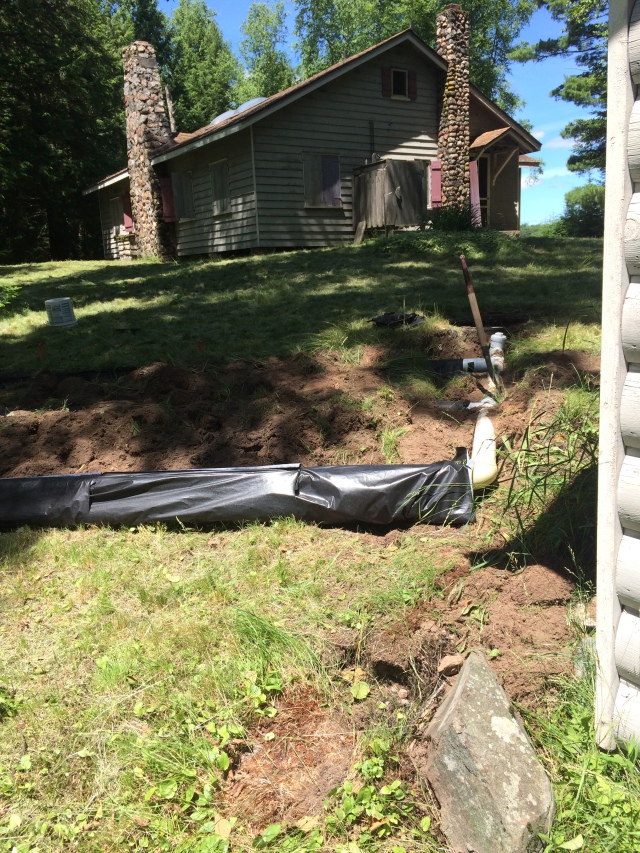 View of cabin from new septic field. Note it is not as close to lake as old field. 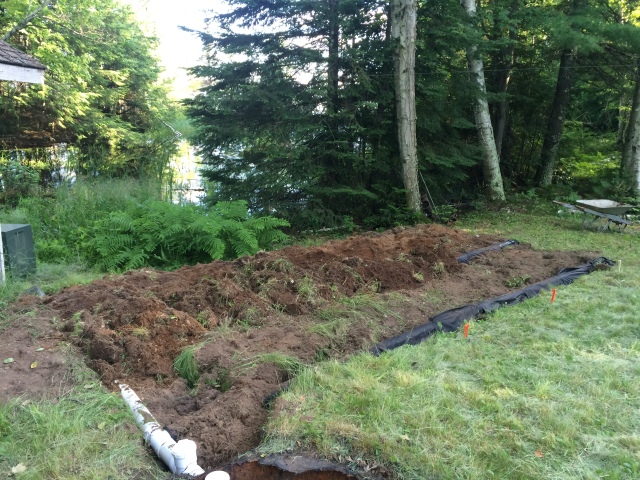 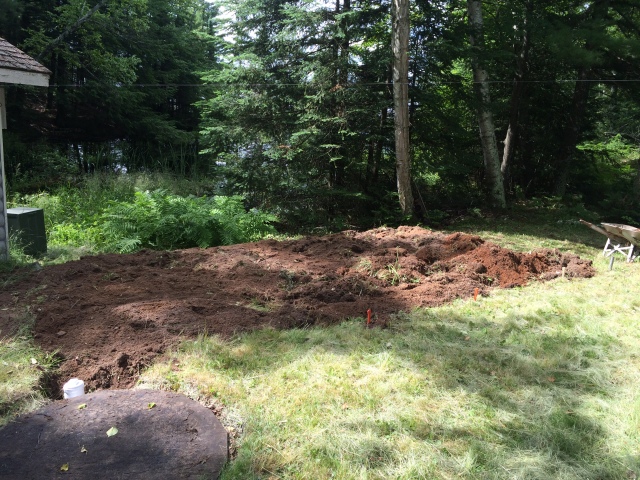 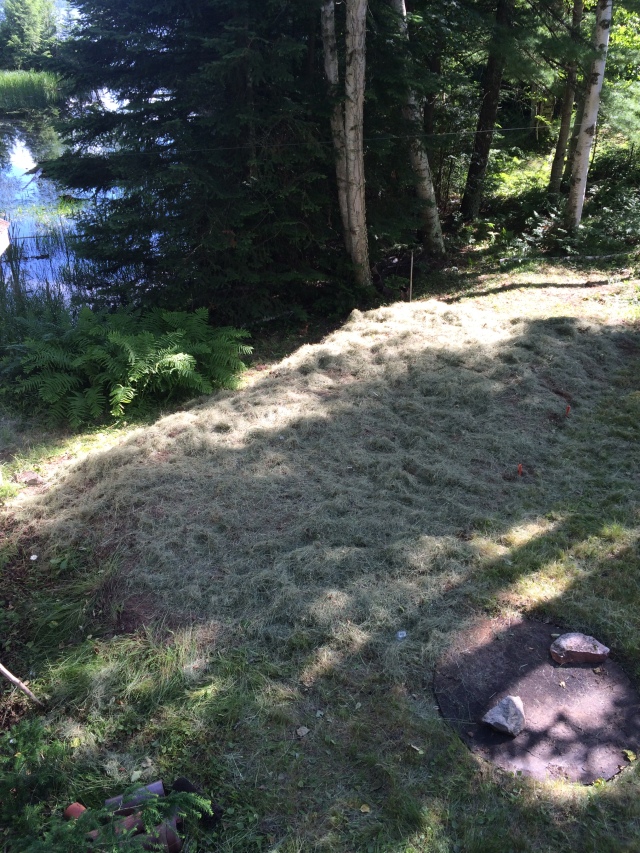 Mulching done.  Read to head back to Vermont.

Found this tick attached to my chest back in Vermont.  Pulled out firmly and into alcohol. Photo take under binocular microscope with iPhone.  Sent to University of Rhode Island.  In a one-day turnaround, on July 4, they identified type of tick (by its white shield marking)  and size relative to head (its head, not mine) indicated that feeding (which transmits disease) had not begun.

Many variations, but this is is “typical”.